Sparta is a town in the Peloponnese and capital of the Prefecture of Laconia in Greece. It is built on the eastern foothills of Mount Taygetos, south of the center of the ancient homonymous city, near the right bank of the river Evrotas and at an altitude of 210 m.

The town was re-established after the liberation of the country in 1834, following King Othon’s decision. Modern Sparta has an open-planted streets, large squares, neoclassical buildings and rich water supply.

From ancient Sparta, there are remains of the temples of Orthia Artemis, Athena Halkioi, Apollo Karnioi, as well as a theater of the Roman era.

The region has a long history both in Antiquity, the Middle Ages and the New Age. Sparta and Laconia are mentioned in Greek mythology. It is also mentioned by Homer in his epics, the Iliad and the Odyssey as one of the most powerful Mycenaean kingdoms and seat of Menelaus, the brother of King Agamemnon of Mycenae, before the Trojan War. About 1100 BC and after the collapse of the Mycenaean civilization, the Dorians, settled in the area.

The ancient theater in acropolis of Sparta is located on the south side of the western part of the acropolis, below the sanctuary of Athena Chalkioikos, the patron goddess of Sparta. It is one of the biggest ancient theaters in Greece. The original stone theater was built at the end of the Hellenistic era, in the 1st century A.D. The present form of the theater dates back to the era of emperor Theodosius in the 4th century A.D. It is estimated that the theater could seat 15000 spectators. Mostly, it was used for political, social and festive events.

The sanctuary is located in a natural basin between Limnai and the west bank of the Eurotas River, outside ancient Sparta, above the reach of all but the severest flooding. The oldest relics, pottery fragments from the late Greek Dark Ages, indicate that the cult has probably existed since the 10th century BCE. Originally, the cult celebrated its rituals on a rectangular earthen altar, built up by the ashes of successive sacrifices.

On the top of the hill of Prophet Elias (5 km southeast of the city), in the area where ancient Therapie was located, are the ruins of Menelaus, an important Spartan hero, devoted to the deified Menelaus and Helen. It is an imposing platform-crate, 23.8 m long and 16.6 m wide, backed by tall retaining walls. At the top was the temple.

Sparta is a town in the Peloponnese and capital of the prefecture of Laconia. It has about 15,000 inhabitants. It is built in the same location as the ancient city. Its center is located a short distance from the ancient acropolis and the Roman theater, and in particular south of the above mentioned monuments, which are part of the archaeological site known as ancient Sparta and located outside the modern city.

The Museum of the Olive and Greek Olive Oil in Sparta aims to highlight the culture and technology of the olive and olive production, which is inextricably linked with the Greek and Mediterranean identity. Unique in Greece, it is located in the heart of Laconia, one of the main olive producing locations in Greece.
In the upper floor the first testimonies about the olive in Greece, its contribution to the economy from prehistoric times to the 20th century, its role in nutrition, body care (cosmetic, pharmaceutical uses), lighting, while special mention is made of its symbolic dimension in religion, mythology, customs and mores. The unit concludes with a brief presentation of the olive’s position in art.

The Archaeological Museum of Sparta houses thousands of finds from the ancient Acropolis of Sparta, known as the Lacedaemonians, but also from the rest of the municipality of Laconia. The collection’s pieces date from the Neolithic Age to the late Roman Period. There are seven rooms of an approximate area of 500 square meters which display only a small part of the collection.

The sculpture was part of a group, probably affixed to the sanctuary pediment. According to several scholars, it formed part of the memorial on the Spartan acropolis to honor Leonidas on his reburial.

The Peribleptos Monastery is a late Byzantine-era monastery in Mystras. It was built in the mid-14th century by the first Despot of the Morea, Manuel Kantakouzenos, and named after one of the most celebrated monasteries of Byzantine Constantinople. The frescos in the main church, dating between 1348 and 1380, are a very rare surviving late Byzantine cycle, are crucial for the understanding of Byzantine art. The Monastery is built into the side of a cliff with a cave supporting the structure. This architectural style is known as the Mystras style and is prevalent in several churches and monasteries in the area, this style is typified by a resemblance to a castle.

The Pantanassa Monastery is a monastery in Mystras. It was founded by a chief minister of the late Byzantine Despotate of the Morea, John Frankopoulos, and was dedicated in September 1428. It is the only monastery on the site still permanently inhabited. Today it is inhabited by nuns providing hospitality. Its “beautifully ornate stone-carved façade” is of architectural note.

The Manousaki House is a dwelling of the early 20th century. This listed neoclassical building was designed to be converted into a museum with exhibits of home furnishings and family memories. Meanwhile, the physical, spiritual and social life of the Spartan bourgeoisie of the time is revealed.

The Oenus is a river in the Peloponnese peninsula, southern Greece. It rises in the watershed of Mt. Parnon, and, after flowing in a general southwesterly direction, falls into the Eurotas, at the distance of little more than a mile from Sparta. The principal tributary of the Oenus was the Gorgylus probably the river of Vrestená. The municipal unit Oinountas, part of the municipality Sparta, was named after the river Oenus.

Built on the slopes of Taygetos, the Castle of Mystras takes the visitor to a trip in time. It remains almost irresistible and despondent, generously offering an unprecedented cultural experience to a landscaping landscape that awakes the senses. Are you ready for a journey in history?. About 214 km away from Athens, in the southern Peloponnese, and specifically in the prefecture of Lakonia, is Sparta, a small provincial town with glorious history, a fame that knows no borders and attracts tourists from all the lengths and widths of the world. 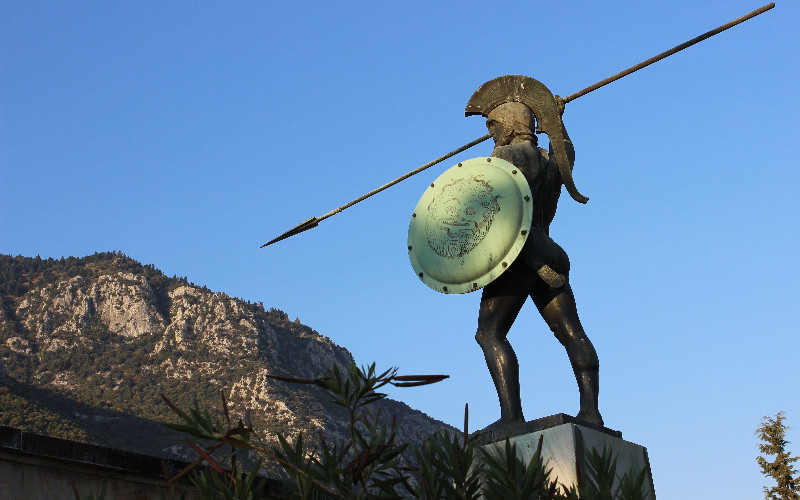